How Do Bet365’s Two New Virtual Sports Games Shape Up?

Last week we brought you news that Inspired have completed work 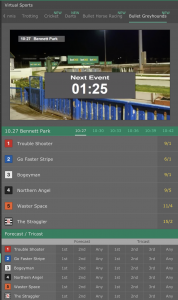 on their new Virtual Basketball offering and that it is expected that a number of different online sports betting sites will be rolling out the game over the coming weeks and months.

However, at bet365 Sport, there are two more Virtual Sports that have been added to the selection of games currently available on the site. These are Bullet Horse Racing and Bullet Greyhounds and that makes a total of four new Virtual Sports games that have been added to the site in recent times, following on from the successful release of Virtual Cricket and Virtual Darts a few months back.

Now of course, the astute amongst you will have noticed that there already exists a Virtual Horse Racing and Virtual Greyhounds option at bet365 Sport, so what does this new Bullet version of each Virtual offer us that is any different to the originals?

In truth, there are very few differences between Bullet Horse Racing

Races have between 8 and 12 runners in which is a more standardised field than in Virtual Horseracing which can have races with fewer and more runners in. There’s also no difference in the time it takes to run an event, with Bullet and Virtual Horseracing both taking three minutes to run one full event from start to finish.

Bullet Horseracing has the same number and type of bets to pick from than Virtual Horseracing with the usual Win/Each Way bets and Forecast/Tricast bets for each race.

You can, as in Virtual Horseracing, making multiple selections from a number of races scheduled to make multiple selection bets such as doubles, trebles and accumulators.

Essentially, Bullet Horse Racing is simply a more simplified form of Virtual Horseracing in that it has more standardised numbers of runners (8, 10 or 12 per race) and each race is run over a sprint distance of 2 furlongs and takes around one minute to complete in full. This allows punters more time to peruse and place their bets

In keeping with the differences between Virtual Horseracing and There are a vast number of similarities between the two Virtual offerings for greyhounds. Both versions feature six runners with the standard vest colours for each of the six dogs following the standard colours and patterns used in real life. The odds on the selections are similar and the facy you can bet on the six runners (win or each way) as well as make Forecast or tTicast bets are the same in both Virtual Sports.

However, in almost every other respect, the two Virtual Greyhound offerings offer punters the same experience.

If the differences are small, why offer Bullet Horse Racing and Bullet Greyhounds? answer. It is rare for a company to release a new version of a game that is already in existence, which doesn’t really offer anything massively different to the original.

Of course, it may well be that the mechanics inside the game have been vastly updated and that this will offer punters a much wider range of odds in their selections or perhaps more likelihood of the lower priced selections winning, or whatever other tweaks they may have liked to have made to the game engine.

However, the fact of the matter is if you load up Virtual Horseracing and compare it to Bullet Horseracing, or do the same for the two greyhound-based games, then you are not going to notice any massive improvements in either of the newer games.

By keeping to this strict ratio, Inspired can produce a number of other However, I have to say that it is a gamble by the company to introduce two new games that don’t really offer anything in addition to the originals and I am sure that a great many people who love Virtual Sports are going to be disappointed when they load up the new games, looking to see the cutting edge future of Virtual Sports, only to see what looks like rehashed versions of the older software repackaged slightly as a new game.